The train between Ulan-Bator in Mongolia and Beijing in China contains possibly the most scenic leg on the whole Trans-Mongolian train journey.

Already a few times I had traveled to China by plane. The fact that I now was experiencing by railroad a constantly changing landscape which slowly changed into a Chinese aura, captured me. Being able to board a train back home in Switzerland and then watching how nature and culture changes during the journey halfway around this planet was certainly a unique experience. Two hours before arriving into Beijing, the landscape changed from a Mongolian flat desert into a green, lush valley. Alongside the hills, our train was squeezing through tunnels and numerous bends. 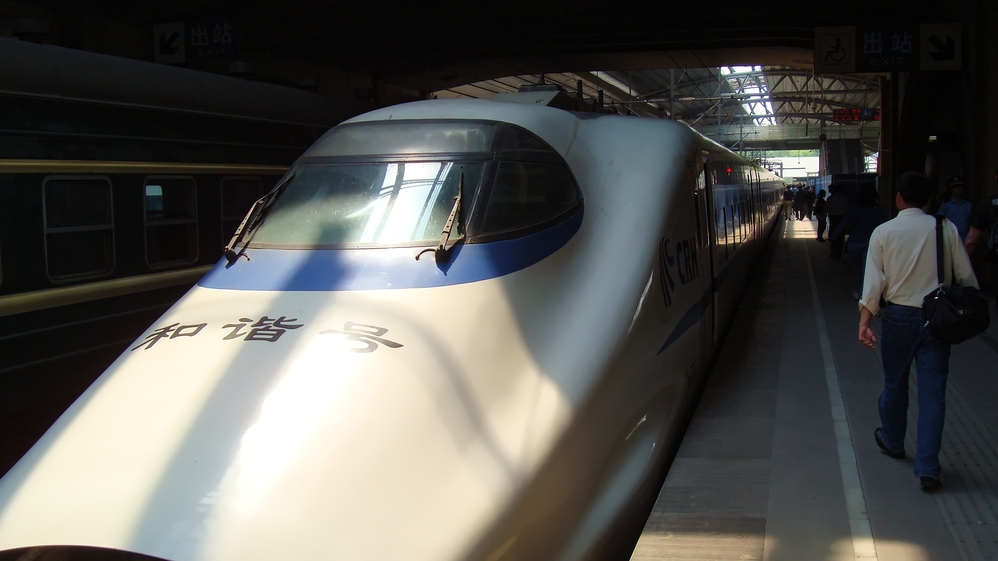 Right after arriving in Beijing we were greeted by a minute of silence for the victims of the Sichuan earthquake. Actually, the minute of silence was a very noisy one, since all the cars turned on their horns. But people were standing in silence and respect - so did we.

The hostel in Beijing was actually a cosmopolitan party place ("Leo's hostel" - for the interested), next to Tienanmen square. Which was quite a change to all the laid back places which I have been to on this trip so far. It reminded me a bit of the hostels back in Australia in the 1990s, where backpackers would celebrate their first parties without parental guidance. A kind of "pretend" sleep-over, but with beers. This hostel in Beijing did cater for that exact audience and I was quite amused to watch all the busy action in this huge place. 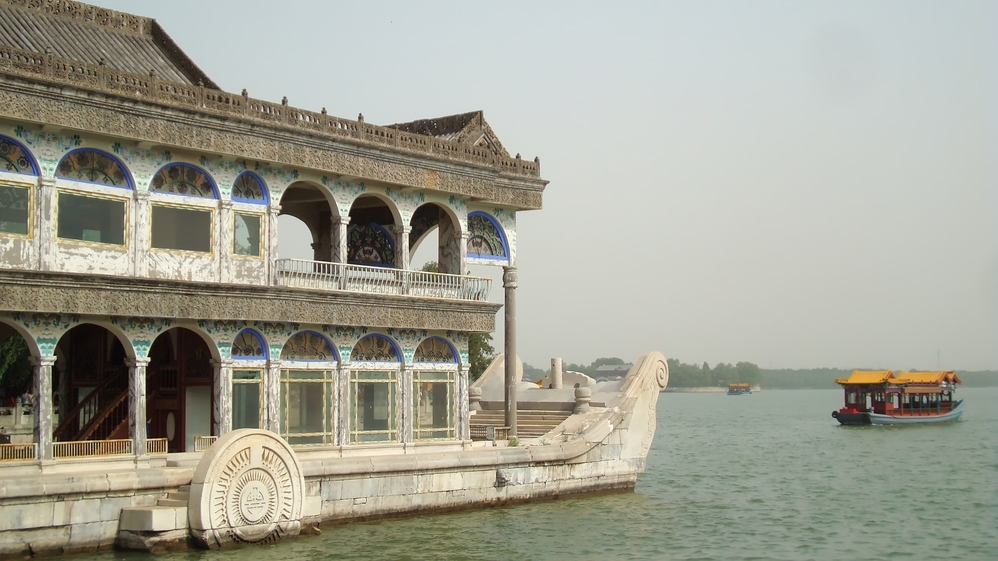 The city of Beijing itself has changed radically over the past couple of years. During my earlier visits, Chinese weren't that much interested in entering a conversations with foreigners, because of the language barrier. Buses were shabby and standing in line was an alien concept to the Chinese. It was amazing to experience how Beijing has changed in preparation for the Olympic Games. Most people are welcoming and eager to help foreigners. They try to speak in English - always with a smile on their face. The buses are - without exceptions - clean, and brand new. In front of the subway ticket counter, the people are queueing (!!!).

Despite all my enthusiasm about the change, there was still the problem of pollution and an obviously shrinking number of bicycles in the city. But this was not really a surprise to me. Those aspects were part of the Chinese progress. 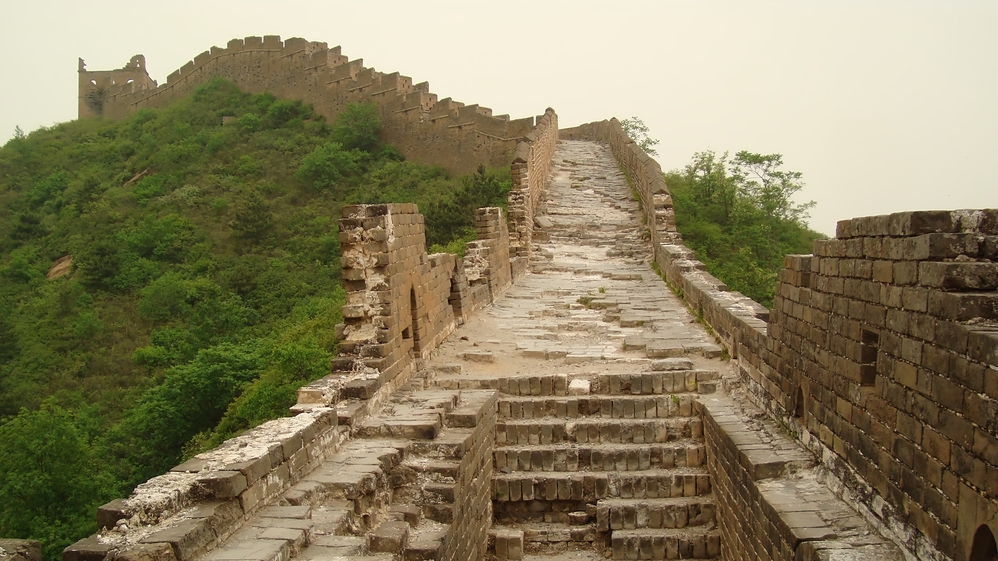 Nevertheless, I did set out to visit the Great Wall during the second day in China. It was actually quite easy to travel there independently - instead of going by a tour. I went by bus to Miyun, then by Minibus to the city of Jinshanling, where there was access to the Great wall. A 10km hike on top of the wall would lead to the town of Simatai.

Although both ends of the hike are somewhat very touristic with a lot of people and hawkers, those crowds tend to avoid hiking. This meant that I was mostly walking in a breathtaking solitude on top of that stretch of the Great Wall. 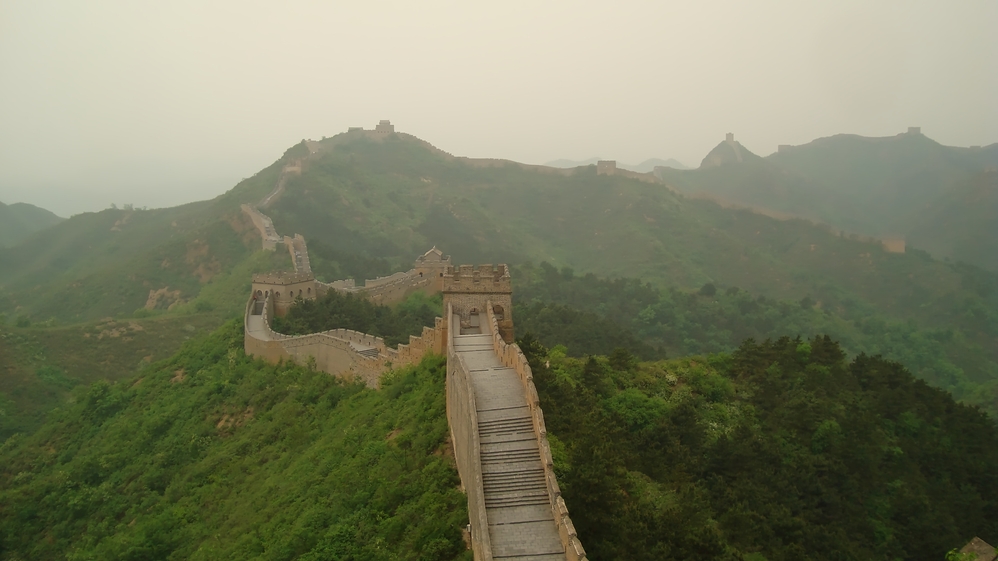 However, returning from Simatai to the capitol city in the evening did prove to be quite a challenge. Because - for whatever reason - in the meantime the Tienanmen square became closed, which meant that the three subway stations nearest to the hostel were inacessible to me. Distances in Beijing are huge - and therefore it took me over two hours to return back to the hostel from the nearest open subway station. Why Tienanmen square was closed off? Only the politicians know. 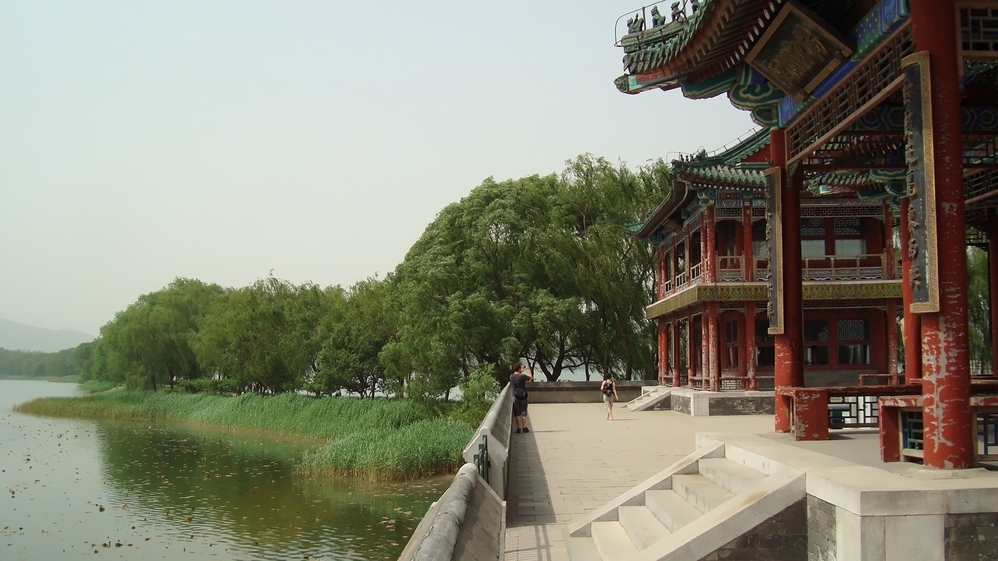 On my last day in Beijing, I went to the Summer Palace by boat together with Jason and Ania whom I met back in Irkutsk. Although very touristy, I did enjoy this part of Beijing, maybe because it was less noisy or maybe because I enjoyed the company of Jason and Ania. Since the ferry company had no ferry boat for our ride back to the city, they did improvise somewhat with a speedboat. The mini-tsunami wave behind our boat went then over the shoreline wetting most of the fishermen sitting along the canal. Since the day was hot, no one seemed to mind the unexpected splash of water.

Leaving so fast was a bit sad and I was torn in between staying among friends in this party hostel and wanting eagerly to discover the Chinese countryside. Therefore, yet again, I had to say Goodbye to people to whom I grew accustomed. All that fun at the hostel, together with Jason, Ania and some other tourists was a nice change. And this new experience of exploring Beijing sights in a welcoming Chinese setting were making this the most memorable of all my stays here.