Located about an hour from Xi'an, Hua Shan is considered to be one of the world's most dangerous places to hike.

To get to the mountain, I established base in the touristic city of Xi'an. This used to be a key trade city on China's end of the silk road during its heydays. Consequently, there are a lot of historical sites to visit. Being a silk road buff myself, it was obvious that this region was high on my bucket list for this journey through China.

Upon arriving in Xi'An, it became obvious to me that there are more silk road nerds than I anticipated. My hostel was packed with a lot of people - which was a harsh change from the town of Pingyao where I ended up having an entire dormitory room on my own. Surprisingly, the hostel - geared towards Western backpackers - hosted a lot of local Chines travelers, too. 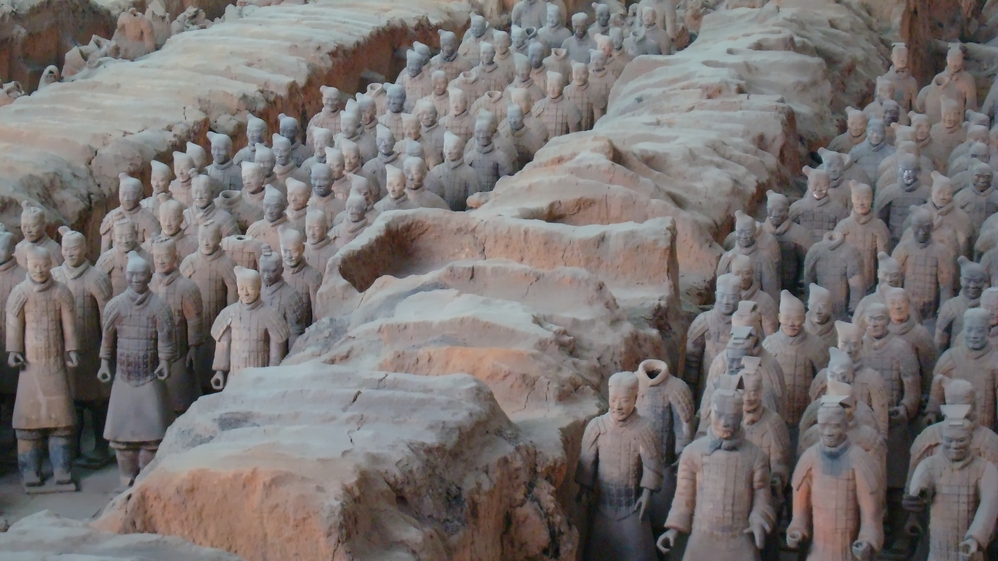 Being still a bit lazy from my resting days back in Pingyao, I decided to go with an organized tour to visit the "Terracotta Army" for the first day of my stay. Together with Joe, Evan and Peer (all of whom I met back in Pingyao) we went for this package excursion that was provided by our hostel.

As it turned out, this small budget tour from our hostel was organized similiar to the one's you get from any posh five star hotel: Being essentially a 7 hour sales trip where the two hour stop at the archaeological site of the Terracotta Army was only a sideshow. 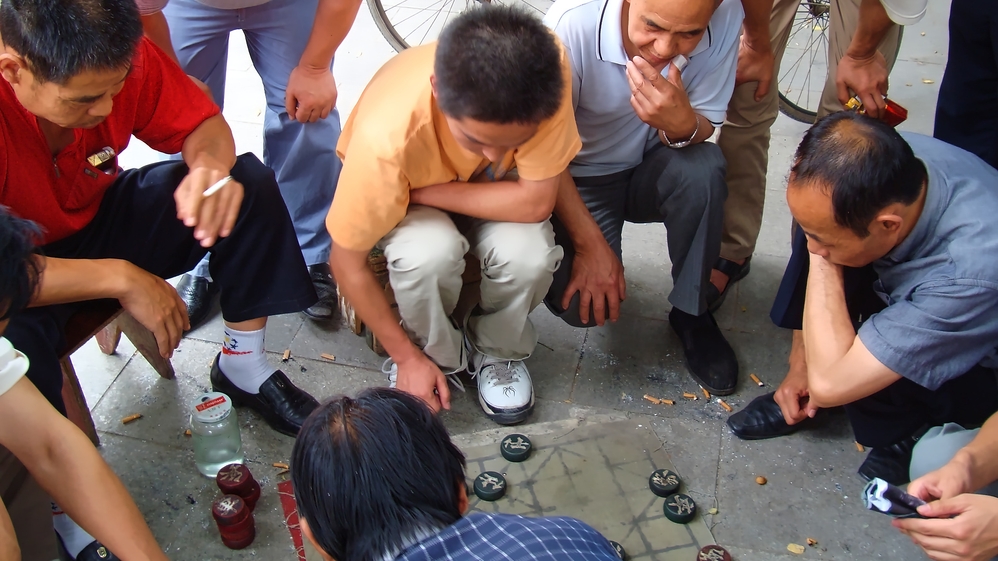 The first stop on that tour would bring us to a souvenir factory, where we were introduced into the making of terracotta statues. After that ten minute crash-course providing us with "insights" into what the guide called "traditional terracotta statue making" (cough, cough, the Terracotta Army was discovered in 1974, cough, cough), our tour group had a lot of time to learn about how to bargain when shopping.

Next, we were being driven to a factory to learn about silk making. This was the perfect opportunity to take a couple of pictures, because the silk sales show was just next to a tourist spot featuring clones of Egyptian monuments, such as the Pyramids. Finally, we got to see the main attraction: The Terracotta Army.

Because day one in Xi'An confirmed all my stereotypes about guided tours, we decided to make a plan for day two, where we would organize the trip ourselves: Go up the Hua Shan mountain. There are some backpacker legends surrounding this climb. It is supposed to be very dangerous and hundreds of tourists allegedly have died on their way up. Before the trip we met a Chinese guy in our dorm who was just coming back from the mountain, confirming to us that the trail was very dangerous indeed - emphasizing we should not underestimate the trip. 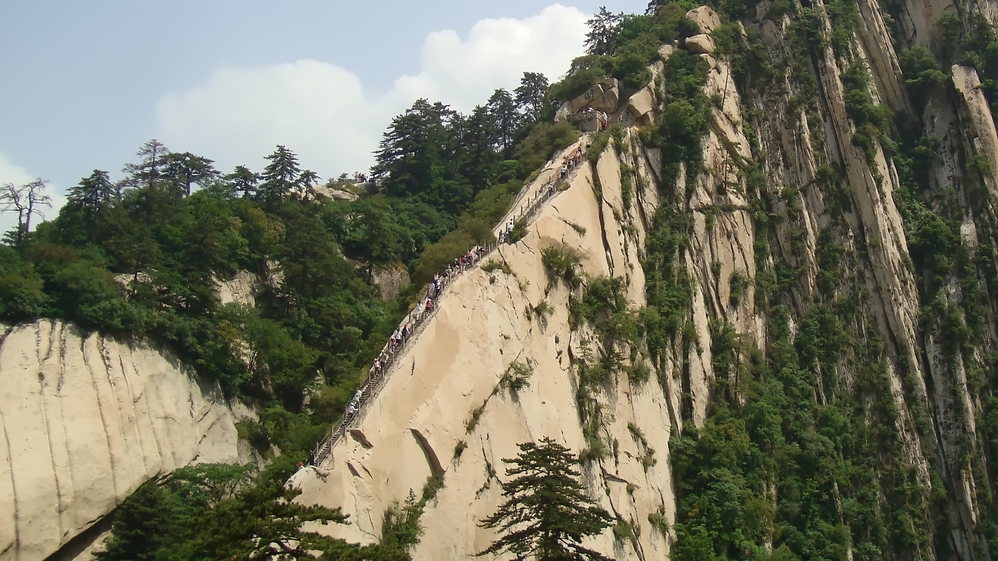 Among other helpful hints, the Chinese guy strongly recommended to wear gloves. We were a bit confused. Sure, the mountain top was at an altitude of 2105m. But would it really be that cold up there? Nevertheless, we set off next day (without gloves) with the intention to stay overnight at the "East Peak" on top of the Hua Shan mountain.

The start at the mountain base was located at an altitude of 400m. The first half of the 6km journey to the "North Peak" was literally a walk in the park: Lots of hawkers were positioned along the trail selling - among other things - gloves. There were also lots of kiosks along the way, where we could stack up on food and drinks - whenever needed.

Most people returning from the top that we encountered while going up were wearing gloves. We started to question our keen ambition to do this trip without gloves. 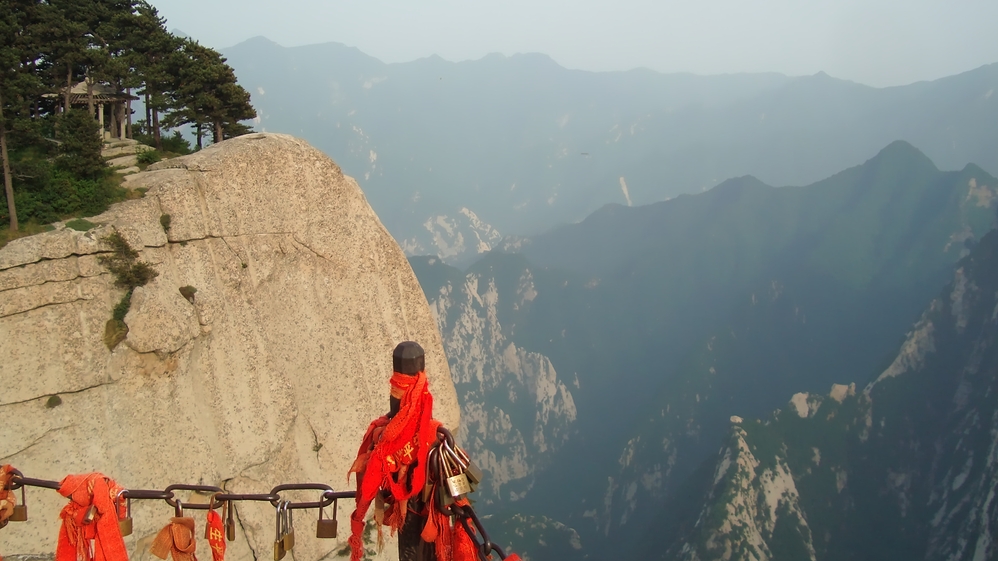 The second half of the "North Peak" climb - at an altitude of about 800m - was indeed getting quite steep. This part of the journey essentially consists of stairs having chains on each side to cling on. Some of the stairs were literally vertical, sometimes having an additional chain in the middle. However, this was far from being dangerous. But we discovered there why the locals were wearing gloves: They were climbing the mountain by walking up "on all fours" (with their hands on the stairs instead of using the chains). As it turned out, gloves were needed to protect the hands from getting dirty.

Once we arrived at "North Peak" (about 1600m), we were expecting the hardest part of the climb being behind us. But we were mistaken. We would need to use another seemingly endless stretch of stairs to reach our destination at "East Peak" (2105m). There, a hostel provides overnight accomodation. Before using the hostel dormitory, we did a small walk using yet another set of stairs to the "South Peak" (2160m) from where we wanted to see the sunset.

However, we discovered, that China is - even at this altitude - still covered in a cloud of smog and dust. The sun simply sets in a grey, foggy soup. Nevertheless, we (Peer, Joe and I) enjoyed the day's achievement a lot and took plenty of pictures to memorize the day. After that, we went back to catch some food at the hostel. Since all prices seem to be regulated on this mountain, dinner and beer were quite affordable. In fact, it was cheaper than most places downtown Xi'an, despite the fact that everything is being hauled by foot on top of the mountain. 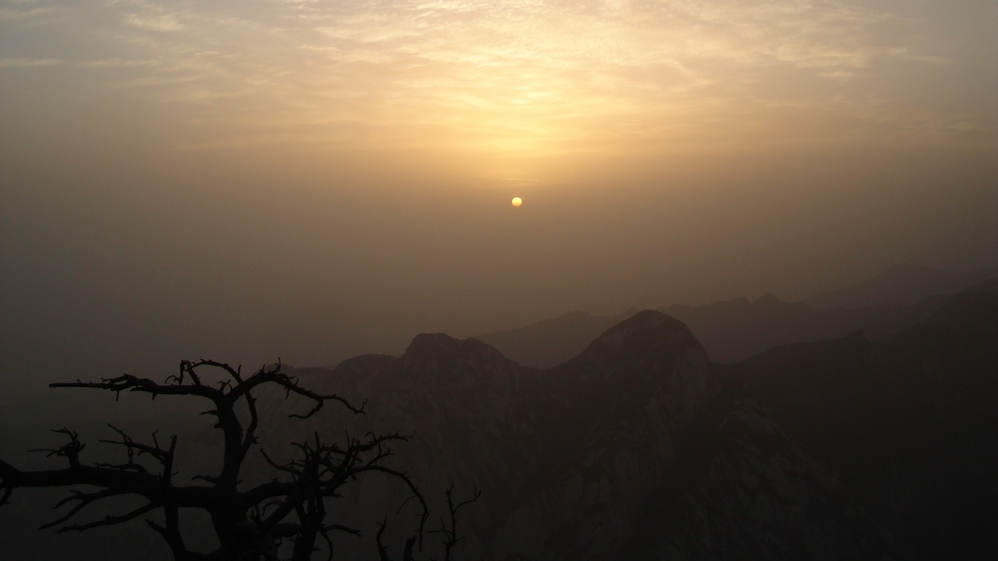 After a short night's sleep, we went to see the sunrise next morning. Compared to the sunset, this was much more scenic. Overnight winds seemed to have cleared the skies. Therefore the view were quite nice and we admired this unique atmosphere of a rising sun in the Chinese mountains among other tourists.

Later, we went for the walk down the mountain - for which we did choose a different route. This trail runs underneath the cable car linking "North Peak" to the mountain base. This path was considered to be even more "dangerous". However, to us it was simply "strenuous". After all, the whole excursion was quite a walk in the park. It's worth doing it and certainly a highlight of any Xi'An stay.