Saying goodbye when leaving for such a long trip is not easy.

As planned, the train to Moscow left on time in Basel at 6 pm. Friends and family did bid a farewell – we won’t see each other for the next couple of months. Leaving was a mixed bag of feelings while looking through the Window seeing Basle fading in the distance.

Luckily, there was Andreij – a guy from Belarus – who boarded the train in Frankfurt (Germany). Although he did not speak a word of English (and my Russian was more than basic), we had loads of fun. Somehow I managed to figure out that he is a student in tax economics and he earns about 180 USD a month.

As for the train ride itself, it went smooth and uneventful during the first night and day. Then, at 5 pm on the second day, we did cross the “Schengen” border between Poland and Belarus – more precisely: Between Therespol (Poland) and Brest (Belarus). Both customs and passport checks took around 90 minutes altogether. Not bad actually. But what happened next was much more time consuming: Due to different rail gauge systems between Europe and Russia, the train bogies had to be modified. Therefore, the entire train moved into a hangar style area. There, the carriages were lifted (with passengers still on board), while all the axles and wheels were exchanged to the “Russian Standard”. 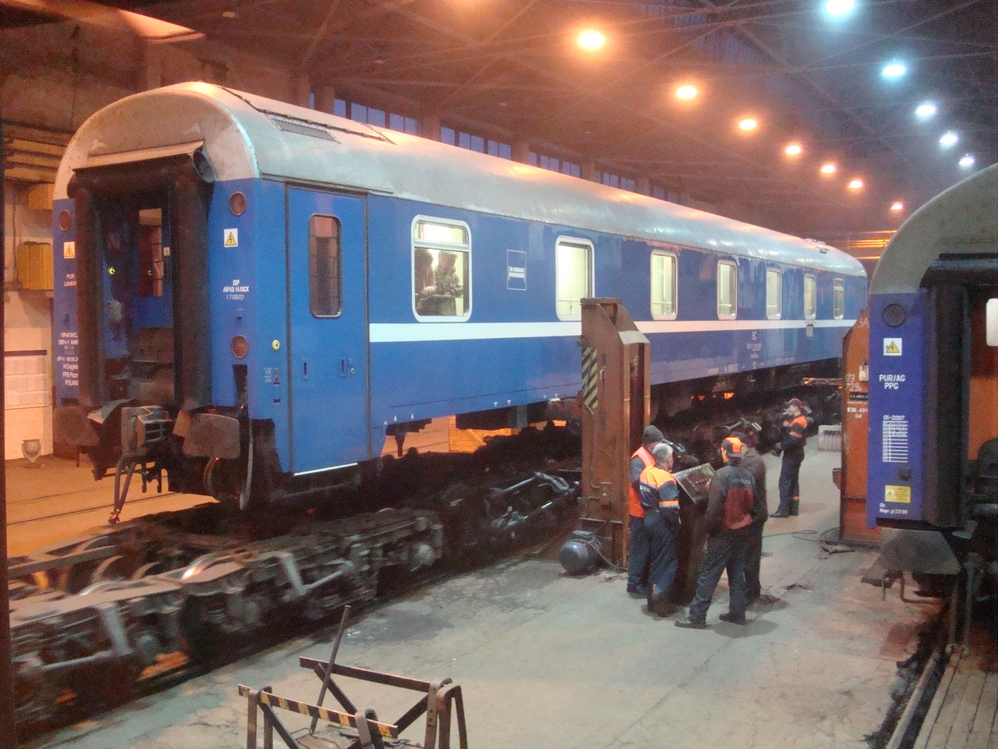 Yes, it was a time-consuming operation. However – everything was very well organized. At least two workers were assigned each carriage for unmounting and mounting axles and connectors between the carriages. It looked synchronized – a bit like an oversized wheel change during a “Formula 1”-race. Or: Like a very busy farm of ants in bright-orange security vests. Being a noisy operation, most of the passengers kept themselves busy taking pictures of the progress. It was a welcome change to the monotonic train ride so far. At 10 pm (9 pm Polish time) we left Brest – which means that the border crossing and the wheel change together took about 4 hours.

After that, we continued to Minsk (Belarus), where all the passengers from my train carriage left. Wow! I was the only remaining passenger bound for Moscow in my car. This gave staff the opportunity to provide me with an extra extra extra special service with plenty of food and tea. At the end of the journey, the carriage responsible, called “Prawadnik” – who I had only seen so far in uniform – did change into designer jeans. He was now also wearing a cap stating “Swiss armed forces” and the Swiss flag. Well, that brought a big smile to my face, and I gave him a powerful “Da Swidanja” (Good-Bye) while leaving the train.

So - here I was, in an entirely different world. The experience is so much different than from a mere three-hour flight. I did board the train in my comfortable, well-known hometown - and two days later, upon leaving the same train, I now find myself immersed in an entirely different culture. Wow! This is one of the biggest cities in the world! Realizing the real distance between my home and Moscow is so powerful and compelling. Much better than taking the plane. This actually feels like a very good start of my journey.