Immersed in the scents of Tashkent

Tashkent, the Uzbek’s capital, is an oasis of fresh air, green trees and a unique smell of wet grass after the light rainfalls.

Tashkent is inexpensive – although most prices have doubled since the “Lonely Planet” (LP) guidebook went to print. Uzbek money is called “Sum” with the biggest bank note coming at 1000 Sum. Since one US dollar currently equals about 1300 Sum, a decent stack of bills is required to pay for the day’s needs. There aren’t many ATM’s in town. And those who are working, seem to struggle to output an average of 50 banknotes per 45$ worth of withdrawal.

After some searching, I ended up using the Visa ATM located at a five-star hotel which was working most of the time. This ATM’s limit is 20’000 Sum ($18), which matches my budget allowance perfectly: A 1.5-liter bottle of coke costs 600 sum (45 cents), the average meal comes at about 2’500 sum (2 dollars). And – there’s definitively a positive aspect to the Uzbek bank notes: As a tourist, I don’t run the risk of having large bills that aren't accepted in stores (a problem which was quite annoying back in Russia). 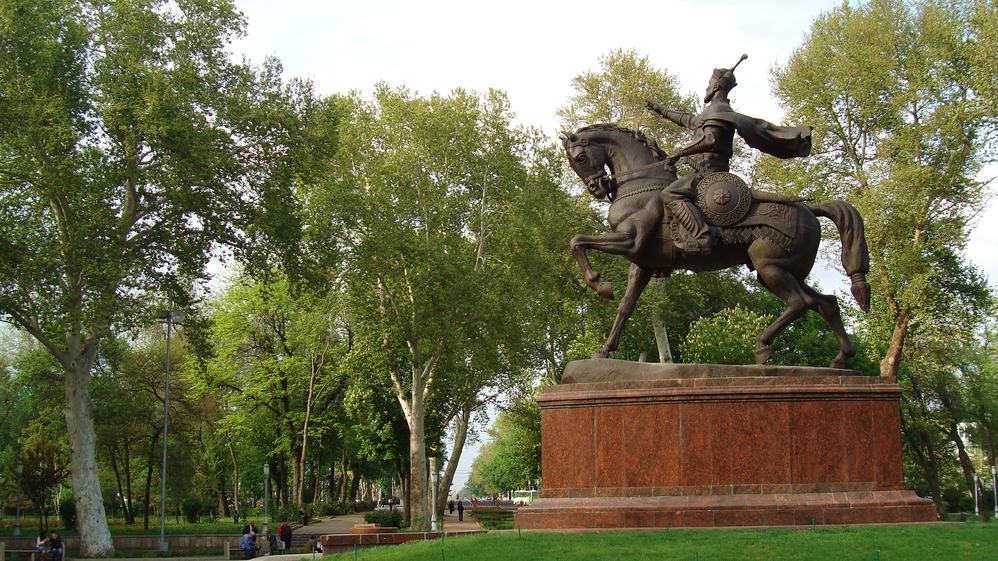 Many tourists don’t like Tashkent, stating the city not being representative of the whole country. I found, however, that lots of places are newly renovated, and all tourist areas are spotlessly clean. This city provides a perfect start to get immersed in an Oriental setting before continuing to other cities around the country.

Tashkent’s metro alone is worth a visit. It is a shame that picture taking in the metro is not allowed – for matters of Uzbek national security. Also, Police patrols are omnipresent in this underground system, where I got stopped on two occasions so far. 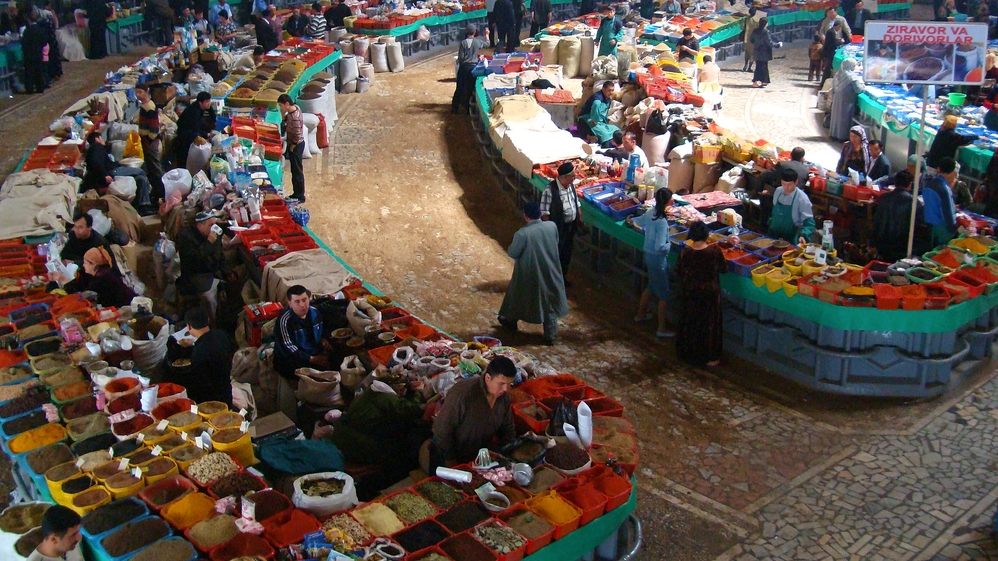 The city is divided between an old, historic town and the new town, where statues of new age heroes and the current president are being celebrated.

The old town also features an important market: Chorsu Bazaar. Under a blue-colored domed building, food and other daily necessities are being sold. Caravans from all four directions arrived at this place for hundreds of years. Hence the name: “Chorsu” (crossroad in the Persian language). I especially liked the spice market hall, where strange scents in the air and fantastic colors kept me busy enjoying the moment. It was the first bazaar, where aggressive salespeople wouldn't constantly harass me. 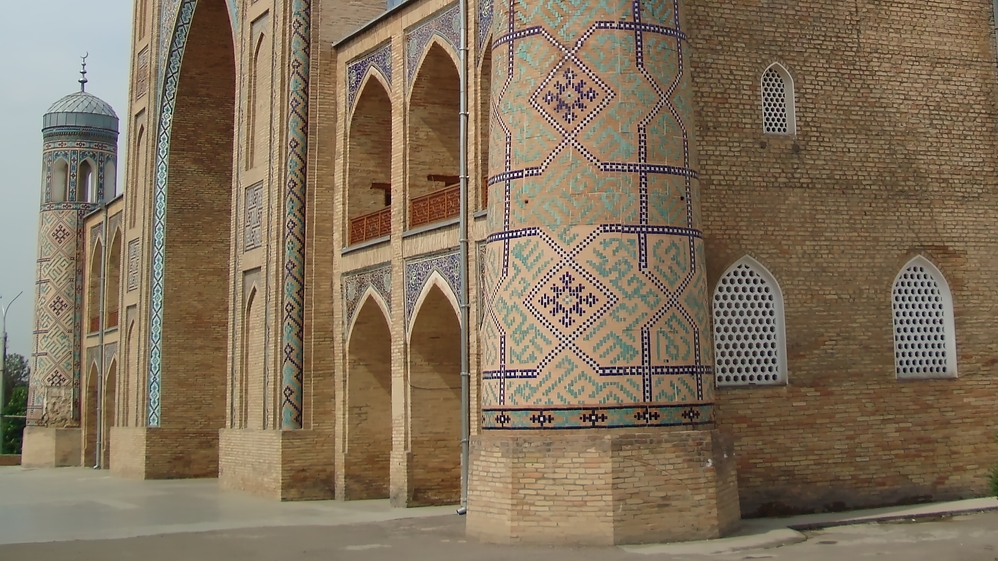 I am mostly unfamiliar with Uzbek history. Education back home went as far as mentioning “Silk Road” and “Chengis Khan”, when it came to Central Asian history. Therefore, I was happy to have learned some aspects of the country’s past from Timur during the train ride from Moscow. His stories were way more informative (although undoubtedly biased) than relying solely on the “Lonely Planet” guidebook who seems to be quite cynical about Uzbekistan. If you want to read about Uzbek history, get another good book (I can recommend “The Empire of the Steppes. A history of Central Asia“).

Another immersion in local culture is, of course, food. I have got a list from Timur where he wrote down all the local food I should try. One of the top rated items (well, top rated by him) is “Shashlik Jigar” (Liver Kebab). I hate liver… But the smell of fresh bread and grilled “Shashlik” is omnipresent throughout the city – so I tried. It’s far from the way we prepare liver back home, and I enjoyed. That was a good recommendation – Thank You, Timur! 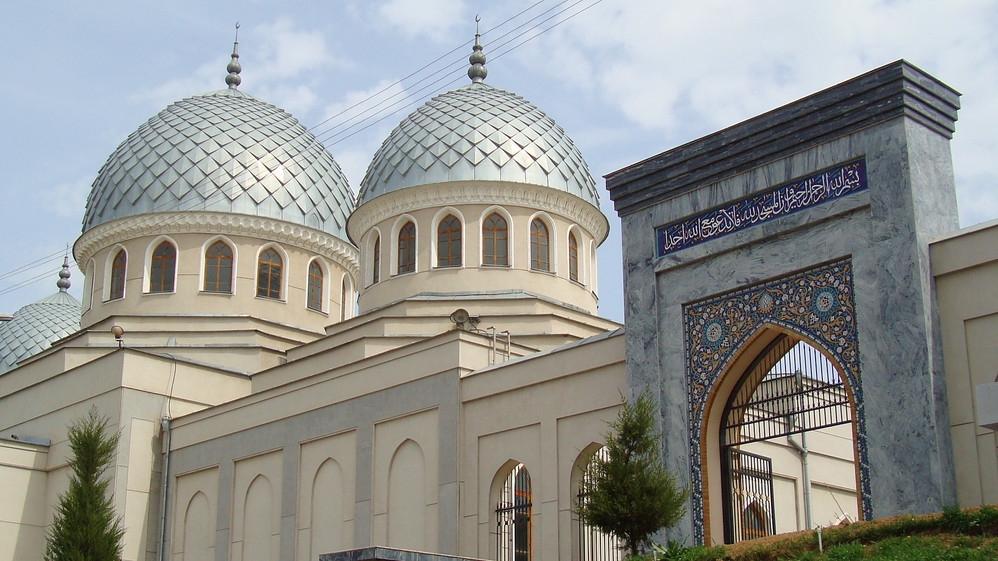 Currently, I am staying at a small hotel in a single room, since my budget allows for this. It’s a welcome change from sleeping in dormitory bunk beds. However, being in a hotel (instead of a hostel) does come with one key disadvantage: I am exploring Tashkent here on my own – but at my pace – without other backpackers. For the moment, this is fine and a welcome change.

For my next town, Samarkand, I have arranged a B&B accommodation which seems to be famous among backpackers. I’ll be leaving tomorrow morning at 7 am on the “high-speed train” linking Tashkent and Samarkand. The ticket for this 3.5-hour journey does cost the excessive amount of 22’500 sum ($20) in first class. Being definitely way out of my budget, I opted for a 2nd class ticket at 11’100 sum.

All I need to know now is the speed of the “high-speed train”. Looking forward to the journey to Samarkand…