Observations of a pink dog

Sleeping with ten people in the same room doesn’t bother me. Let's emphasize the word 'me' – because I do perform the art of snoring when being drunk or simply when being very, very tired.

Therefore, I’m quite happy to report after the first night in the dorm, that others in the room snore, too. Which is especially true for the 22-year-old blonde girl from Indiana, sleeping in the bunk above me. She is performing her snoring with a thorough soprano voice. It is quite funny to watch new male arrivals trying to make contact with her before the night – then spotting their disappointment and – sometimes – sheer anger during breakfast next morning. I have come to the conclusion that men prefer a quiet night over good looks. Poor girl.

But then again, how does my snoring compare to hers? Is mine acceptable or even worse than hers? Or – maybe I don’t I snore at all? Hmmm… should I ask my roommates to rate my snoring?

Well, the only hint so far is the fact that everyone – including the blonde – is still talking to me. That’s a good sign. Even better: We party together. But – maybe the guys are just more polite towards an old chap than with a young lady? Well, all these questions won’t be answered here in Moscow, since I am about to leave on a train bound to Tashkent (Uzbekistan) tomorrow. 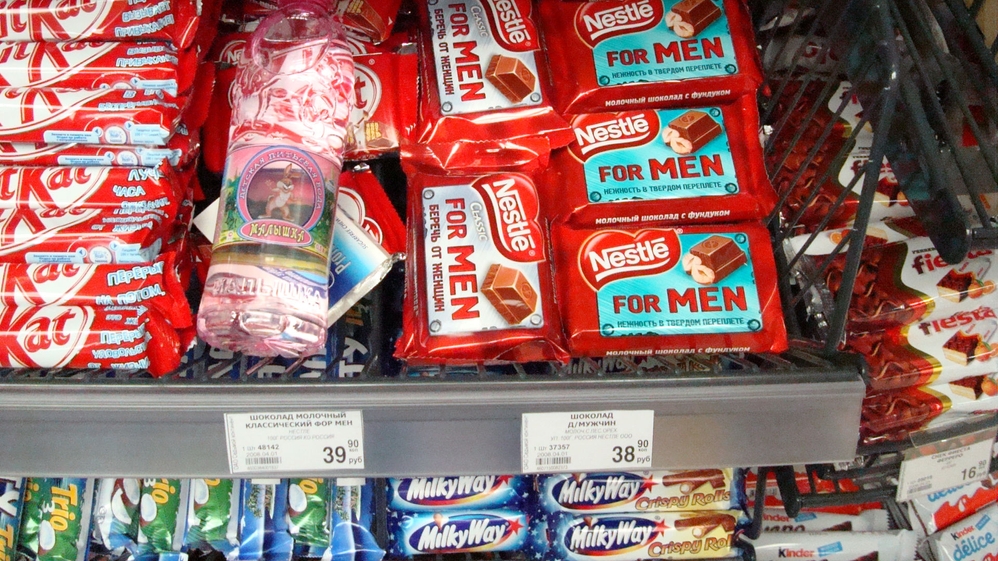 Getting that train ticket was an adventure on its own. Long distance train stations are scattered throughout Moscow, depending on their destinations. Since the European/Belarus, as well as the Siberia-serving stations are popular among tourists, it is relatively easy to get tickets there – the railway staff is somewhat used to deal with foreigners not speaking Russian. Within these popular train stations the Russian railways provide either a dedicated counter for tourists – or one might just get some help from other tourists or Russians who speak both languages.

Mind you: By writing "easy", I exclusively mean the linguistic interaction at those stations. In general, all train stations do involve queuing for hours at several counters, with an occasional fight for your turn. Well, that was the information I got from other backpackers at the hostel before going to the train station. 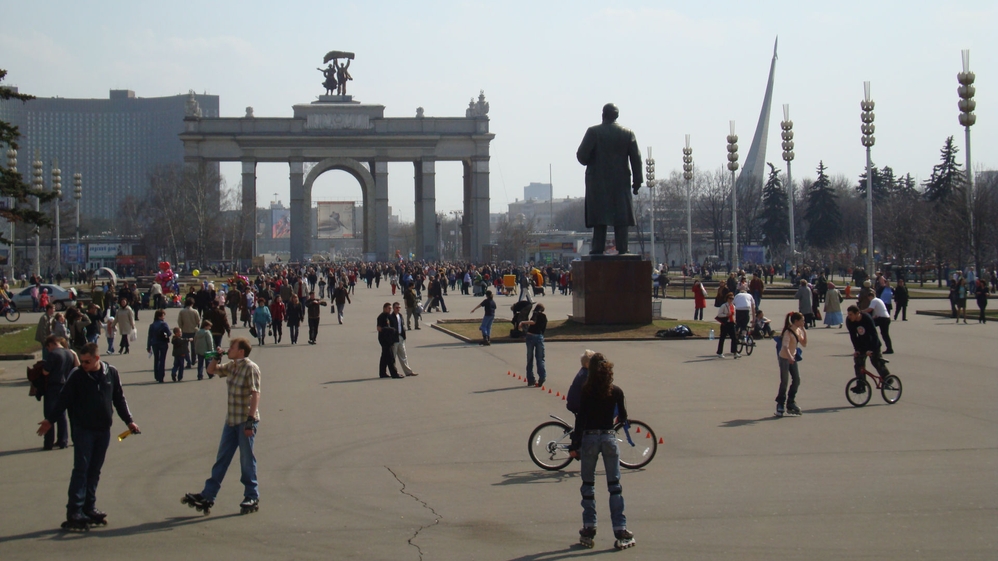 However, knowing what to expect in a "touristy" train station, made me a bit anxious about having to get a ticket from a less touristic train station serving Central Asia - where I had to get my ticket from. No other backpacker at the hostel was undertaking a trip to that region. So I couldn't rely on any information or hints how to organise the ticket effeciently. Even the old lady (Babushka) sitting like a hawk next to the hostel entrance couldn't provide me with useful directions (besides looking at me with a palm face stating "son, where the hell are you planning to go?").

Bypassing the Siberian tourist route makes me stand out like a pink dog in a supermarket. However, pink dogs also want to travel. So, here I am, entering the scene at Kazan station to perform the art of ticket buying with ten words or less of Russian. Tashkent is my destination – and seemingly a route where no foreigner has gone before.

Not surprisingly, all the signs in the Kazan station building are in Cyrillic letters exclusively. About 30 ticket counters with their railway staff - being surrounded by hundreds of people - waited to be challenged by my lack of Russian language. As usual here in Moscow, there was no line at all. There may be a system - that is known to Russians only - where they decide who’s turn it is next. But I haven’t figured that out yet. To me, it just looks chaotic.

What seems to work, is the use of both arms, elbows, and a bad stare as if you are looking for a fight. Slowly, this behavior did help me moving closer towards one of the counters. Since I didn’t carry enough Rubles in cash to buy the ticket, the choice of potential counters narrowed down to about a dozen who featured credit card logos. I decided to make counter number 3 my target and slowly worked my way forward. 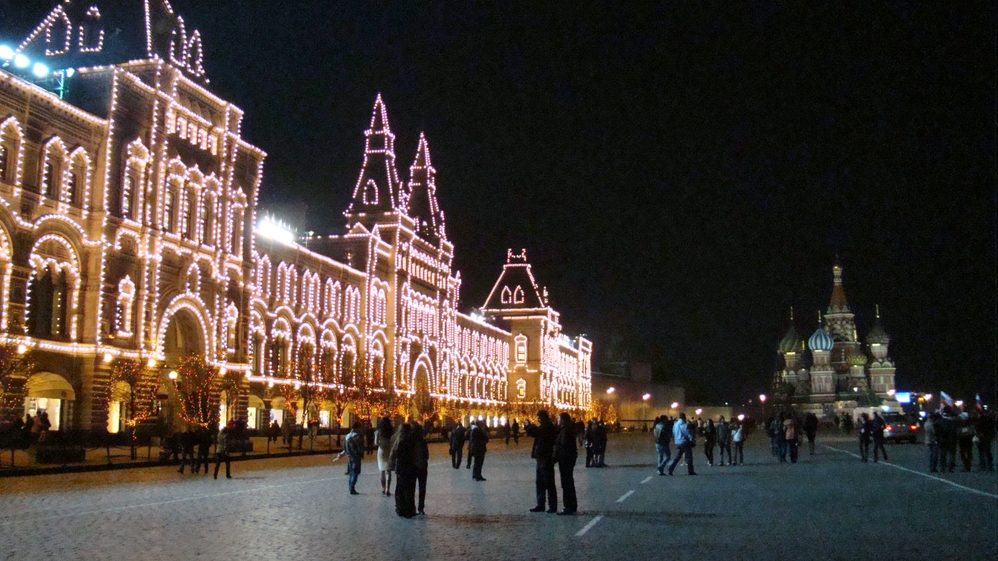 Once it was my turn, I felt an adrenaline rush. Because I immediately realized that no one in this building did speak the tiniest bit of English. There was zero chance of getting a ticket if wouldn't be able to pronounce the travel date in Russian. So I needed to write down the dates on some piece of paper. But the only writeable paper at hand was a box of medicine. It was the Cholera vaccination that I carried in my daypack since I had to do a second oral intake that day. “Yes, there is enough white space on the box” went through my panicked mind – and I therefore quickly scribbled down “Tashkent” and “7-4-2008” (the date). While handing over the medicine box, I also mumbled "Platzkartny" (3rd class) - one of the few words that I remembered, because it sounded funnily German to me. The lady grabbed the medicine box and gave me the stare of death-rays (I think that Darth Vader’s mother must have been a female Russian railway agent).

What was going on? Didn't she like the use of a medicine box? Or did she have trouble to decipher the non-Cyrillic letters? So I gave it a hard try to confirm with a big smile: “Dobri dien, bashalsta adin Tashkent, Platz”. Wow! What adrenaline can do to my brain! Here I was, creating my first complex Russian sentence. Awesome! I was proud of myself. Would she be, too?

The ticket lady gave my request a deep thought. After a while of silence, she grabbed the Cholera medicine package and left the counter. “Oh no, stupid me – not only won’t I get the ticket – I’m about to lose my Cholera protection!” rushed through my mind. Two minutes later she came back to the counter, handed me over the medicine box by writing “C-29” on it. This was exactly what I needed. This could only mean “Cassa 29”! Finally, I knew where to queue!

Because - Welcome to Russia! Cassa 29 (or: counter 29) was just the beginning of a ping-pong journey among several other counters. To make a long story short: C-29 could have issued the ticket – but only against cash. Since I had only credit cards with me, I was sent to counter 11. That counter can do both: Issue the ticket and accept credit cards. However, I am a foreigner, and before seeing counter 11, I was supposed to present my passport with the Kazakh and Uzbek visa for inspection at counter 1 first.

After a very entertaining four hours spent at the Kazan train station, I finally held the train ticket for Tashkent in my hands. 2nd class though, since the ticket agent wouldn’t allow me to travel in 3rd class – for whatever reason. Well, I was quite proud to have obtained this piece of paper on my own. By doing so, I saved a whopping 100 Rubles surcharge that my hostel applies to railway tickets ordered though them. In fact, I was so proud and excited about my achievement, that I offered myself a beer that evening – which incidentally cost 100 Rubles.

That night I went to bed a bit tired and drunk. And I learned next morning that men could also give other men the evil stare. I felt like a 22-year-old girl from Indiana. Or like a pink dog. Depends on how one is looking at it...