The Olympic torch relay in Urumqi

So there was the Olympic torch relay in Urumqi on June 17th. And I was waiting for the processing of my Chinese visa extension and hanging around the place anyway. Obviously, this Olympic event would be a welcome change from the usual sightseeing. So I was decided to join the local crowd and cheer in tune for the upcoming 2008 games in Beijing.

But this is China and things are - this year - a bit complicated. Urumqi is located in the Xinjiang Autonomous Region, near the Kazhakh and Kyrgyz border. Most of the local people - the Uyghur - have more in common with the people of the neighbouring countries, than with the (Han-)Chinese from mainland China. Similarities of the locals with their Central Asian neighbours are the roots of their language, the food and the religion. On the other hand, Beijing is far away, which helps to keep the pioneering Wild West spirit alive everywhere around here. 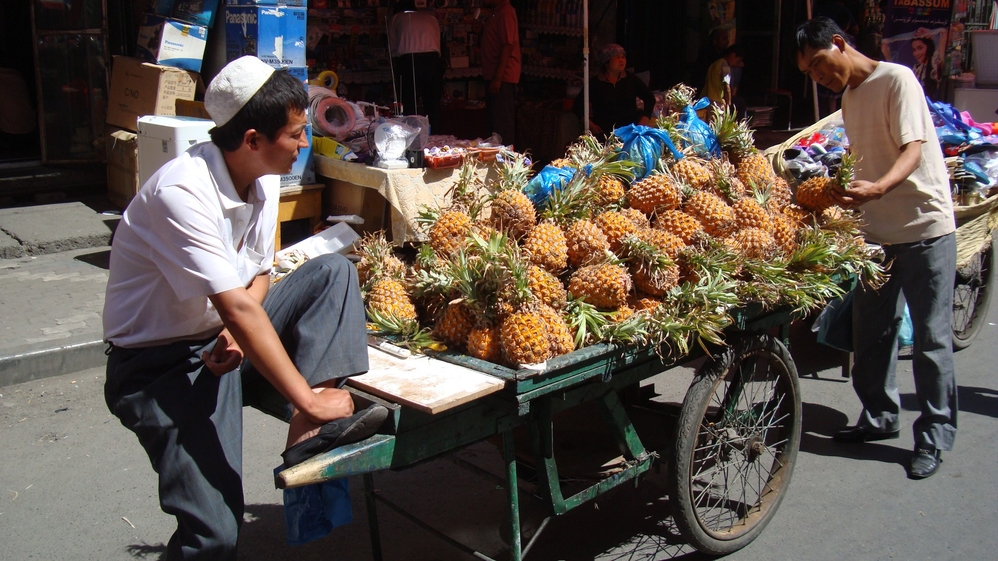 Consequently, Xinjiang is considered suspicious by the motherland. And the average Chinese believes that this province is a very dangerous place full of potential terrorists. Therefore, special security measures were put in place for the Olympic torch relay in Urumqi. Being in a hostel in a central downtown area as a tourist was not the best move. All guests were notified the day before the torch relay, that they had to stay inside the guesthouse between 7am and 2pm during the ceremony.

Assuming that Chinese people would be quite excited about the Olympic games, I didn't believe that we weren't allowed to go outside the hostel to visit the torch relay. Nevertheless, I stocked up on food. Being an optimist, I also bought two small Chinese flags, since I wanted to joyfully blend in with the locals during the event.

However, things got a bit suspicious that same evening before the torch relay. Military trucks were moving into the city, joining the already increasingly visible police force. Some groups of men in black jumpsuits also drew my attention (I think it was a kind of a special force). Guests arriving later that evening, reported that their documents were checked by police and that they had spotted bomb squads checking out some bridges near our place. We were then further informed by the hostel staff that there would be no electricity between 7am and 2pm next day. So we should take precautions in case we needed a shower or go to the toilet. 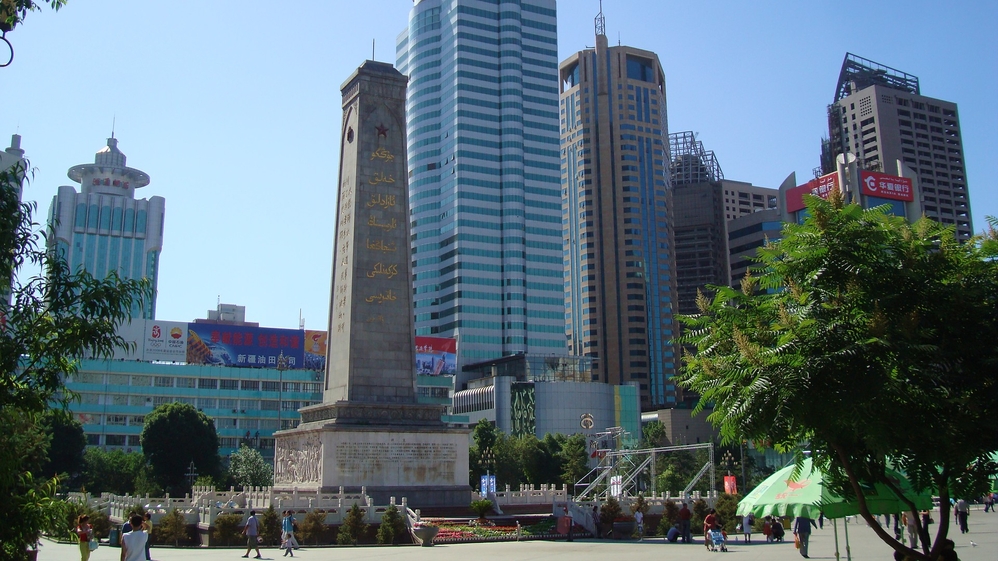 In fact, next morning, the common showers were using the battery powered emergency lights. Which was a clear indicator that electricity had been cut off. After grabbing my torchlight, I selfishly used up the last remaining warm water out of the boiler to get a shower. I was still decided to attend the torch relay, since it's not an everyday event that one can attend. Therefore, I grabbed my two flags and my camera to go outside. Together with other tourists I could get a glimpse at what was going on. However, we didn't get really that far. Police (speaking to my surprise perfect English) ordered us to stop taking pictures and go back inside the hostel.

They did follow us and ordered the staff to lock the door and shutting the blinds. Being locked in the first floor of the guest house, we could witness at least the preparatory events in the side street linking to the relay route. Students in uniformed Coca-Cola shirts were hauled in by bus. Other groups arriving in batches were factory workers wearing the Olympic Noodle sponsor shirt. All of them passed a checkpoint where some of them rehearsed their proper cheering - then they marched to their assigned viewpoint. Everything was meticulously orchestrated and I was amazed at how quickly local residents and foreign tourists were replaced by government actors. 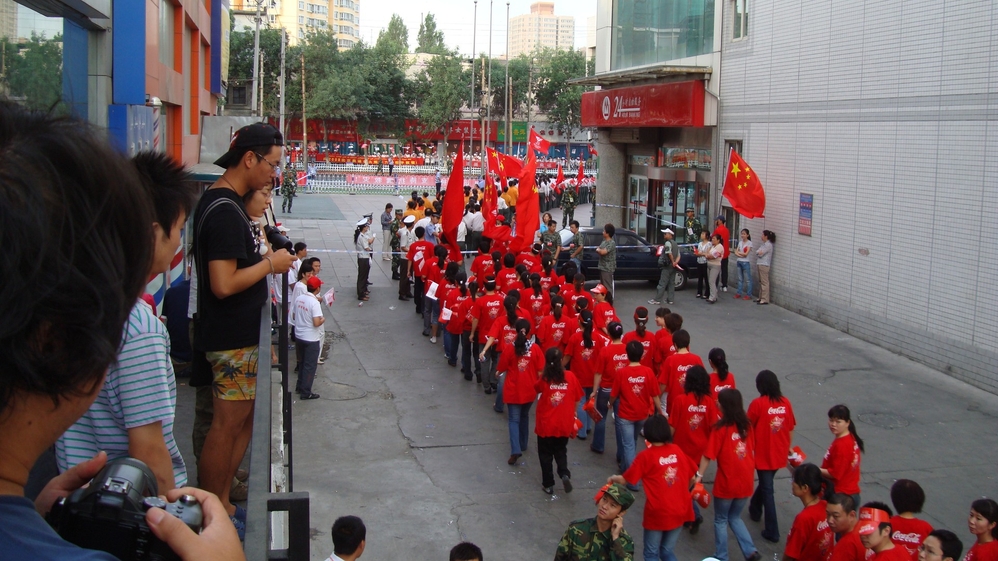 Obviously, there was no way to watch television to see what was going on just around the corner of our building. As the day grew older, the sun heated up the common rooms - shut windows and the lack of air conditioning were contributing their part to create an atmosphere where some people started to freak out a bit. Surprisingly, the - otherwise calm - Japanese tourists were among the strongest voices stating their disgust at the overall situation. Thomas, who stayed in a neighbouring hotel away from the torch relay route wasn't affected at all by the quarantine.

We texted each other to reschedule, since our plan to visit the event together clearly went downhill. At 1pm our guesthouse got back the electricity and a little later, police ordered to open doors and windows of our guesthouse. Finally, we were allowed to leave the building and I rejoined Thomas and his girl-friend. The imported actors were gone as quickly as they had appeared. And the streets looked quite empty for a moment, since it took some time for the locals to settle back into the center of the city.

This event leaves me with some mixed feelings. The Urumqi Olympic torch relay was a staged celebration as fake as the average Swiss watch being sold everywhere here. However, the locals seemed not to care much about what just happened. But then again: Witnessing such strange events is also one of the reasons we travel. Even if that means missing an Olympic ceremony taking place just around the corner.