The Tashkent Express is a spectactular multi-day journey from Moscow to the Central Asian countries.

The last day in Moscow started uneventfully. In the morning, I went shopping groceries for the upcoming four-day journey on the train to Tashkent. I stocked some fruit and cup noodles. For lunch, I went back to the hostel where two roommates, Jeremie and Mark, were hanging out with two Canadian girls from the other dorm. We all decided to visit the city together, since everyone was somehow preparing to leave – either towards Mongolia, China or Europe.

This turned out to be an unexpectedly funny day, where we finished hanging out like the Russians do: Getting a couple of beers from the kiosk and settling on a park bench spending time chatting, joking and watching other people passing by.

A bit dizzy, I went – after a farewell bid – straight from the park to Kazan station to catch the train, due to leave a quarter to midnight. Again, I stocked up some water and a huge bottle of three liters of beer. Not that I needed the alcohol, but I knew from other travel reports, that drinking Vodka on the train is quite common and I wanted to “bring in” some form of token for a potential party. As it turned out, I was quite right about this.

Upon approaching the train’s platform, there was some shouting. At least a dozen train officials were running into my direction and over the rail tracks. As it turned out later, the men were chasing a thief who tried to mug a “Provodnitsa” (train assistant). But at the very moment the turmoil happened, I had flashbacks about when I got stuck in the mid-90’s riots in Brazzaville (Congo). This was the same noise, the same shouting and the same sudden, uncontrolled rush of a crowd. Needless to say that my adrenaline was high and for a second I had some doubts whether I was doing the right thing here.

After a split second of an afterthought, I continued to walk along the carriages to look for coach number eight – which was my coach. There, the Pravadnitsa asked me from which country I came from, then checked my ticket before I could enter the car. After having put down my bags in the empty four-bed compartment, I decided that I needed some air and went back out on the platform to take some pictures and stretch my feet. 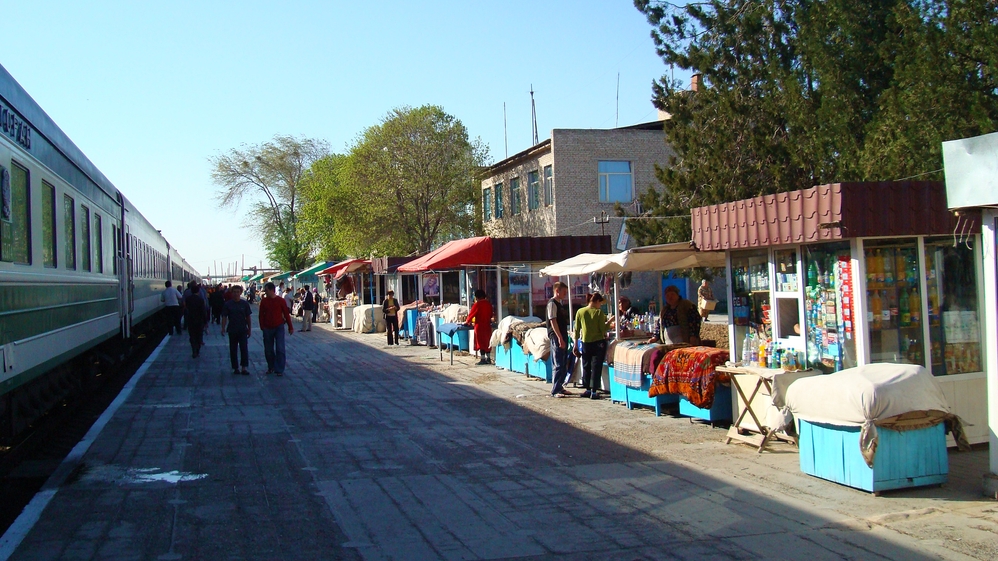 Suddenly a big fat guy in uniform was grabbing me on the shoulder and pointed me to my carriage. I could figure out that he wanted me to go back to my compartment. But hey, the train won’t leave for another half an hour or so, I thought and shook my head. Until I saw the horrified face of my Pravadnitsa who went into a loud Russian shouting, gesturing and urging me to go back to my car. Later, I found out that there is a lot of stealing going on. The train assistant was outraged about my naïveté and ordered me to stay and watch my belongings.

This uneventful story - to me at least - became sort of running gag among the other passengers on the train who were in sheer disbelief that I would have so much confidence in the Russian railways and thus leave my bags unattended. They mocked the inexperienced European and I played along and smiled.

After the train’s departure, the Pravadnitsa still was worried about my safety. Therefore, she put me in a compartment with a young Uzbek – Timur - who was traveling home after an extended period abroad. He did spend part of his childhood in the U.S., and therefore we had no problems to make conversation. Timur was the only person speaking English in the entire car (and probably in the whole train). He introduced me to people, translated stories and jokes, gave me hints for Uzbekistan, chased the salespeople away from our compartment and ordered some Uzbek meals to our compartment. Moreover, he helped me to fill in the various customs forms along the route which all are in Cyrillic letters only – and he contributed to easing customs control. Last but not least, upon arrival at Tashkent, he organized a Taxi for me using his mobile phone. 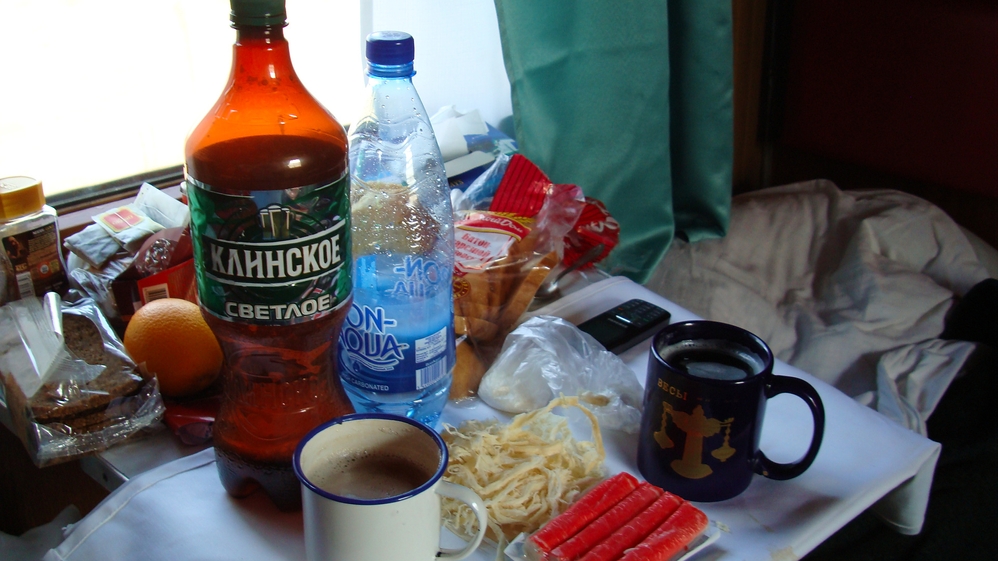 During the train journey, Timur also introduced me to Sergej, who was a sailor for the Russian Marine, based in Murmansk, Russia. Sergej was full of anecdotes and jokes. Needless to say, that on the third night of the trip, the three of us would drink vodka together. Sergej explained how they would smuggle alcohol on board a submarine, where drinking was strictly forbidden. They used syringes to inject vodka into melons or other fruit. Or they would extract alcohol from glue or shoe polish. I don’t post all the various smuggling recipes here to keep the story short. Let's just say, that it was quite hilarious to learn how intelligent humans can be when it comes to smuggling alcohol.

By the third and fourth day of the trip, everyone had become somehow friend with every other passenger. And Timur was quite amused how the other people were in disbelief about me traveling the world for a full year, alone – not being married nor having children. Tourists aren’t very common on this route. According to “my” Pravadnitsa, I was her fifth tourist this year – and she already made 12 trips back and forth to Uzbekistan in 2008. She met a French couple some weeks ago and was consequently reiterating the few words she learned from them. She also wanted to exchange some videos between her mobile phone and mine. Sharing videos or ringtones over Bluetooth is quite common among the people on this train, and I now have a beautiful collection of Russian and Uzbek songs and video clips on my phone. 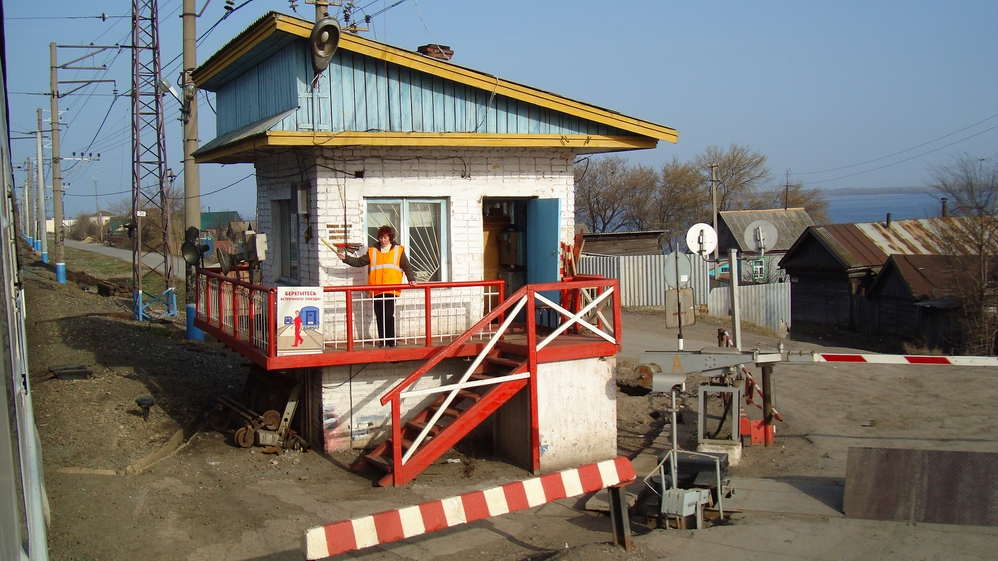 It would be an understatement to say that I was just lucky in many respects during this journey. Our car was by far the funniest. Time flew by as we crossed Russia and the Kazakh steppe. One day, I went to the 3rd class car – the "Platzkartny" – I originally wanted to book. To get to that coach, I crossed a lot of other 2nd class vehicles. All of them were quiet, people were either dozing or reading. A big contrast to our car, which was full of card playing, joke telling, a bit of beer or vodka drinking people. Thanks to my "cool" Pravadnitsa and Timur, this train ride will certainly remain as an unforgettable memory.

Border crossings were smooth – although each of them lasts between one or two hours during which the train stops. Without these administrative stops, the whole trip probably would be an entire day shorter. The distance covered in four days was about 3500 km. Although crossing the border into Kazakhstan was a pleasant experience for me, as I had a relaxed chat with an English speaking Kazakh customs official, my fellow passengers didn't experience the same. 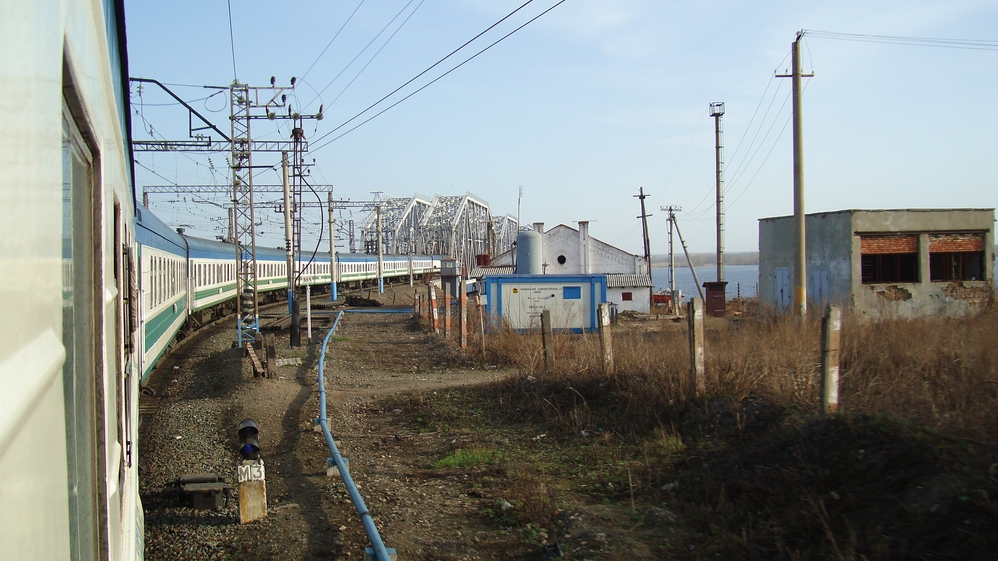 Stationed at the border, we could watch through our carriage window, how the Kazakh border control lined up Uzbek people at the station platform. Together with their luggage, it was evident what was going on: Either paying a small sum of money or a full inspection of luggage. Timur told me that he was quite happy to be with me in the compartment because customs would never do this kind of inspection to a tourist. Somehow I seemed to act as a shield. For my part, I was happy to have been able to contribute at least somehow a small bit in return, if it was true that my presence acted as “protection”.

While I am writing this, I have arrived in Tashkent where I decided to extend my stay for another day. The city is beautiful, has a lot of green parks and is full of sights. While walking the streets, I am thinking quite a lot of the fun on the train with Timur, Sergej, my cool Pravadnitsa and the other people in the same coach car. This is something I was unaware before my trip: How many emotions the meeting and separating from friends can cause. Luckily, I have plenty of roads ahead, and I do know, there will be other moments of great fun ahead.