Khiva is a beautiful old city with archaeological evidence that indicates the first settlement around the 6th century.

Rustam and his friend Shakzhod helped to find and organize a shared taxi taking me from Bukhara to Khiva. There is no train connection between these two cities and shared taxis are the most sensible way of transport. What you would do as a tourist, is to hire all the seats in the taxi, so you can stop where you want and have enough space in the car. 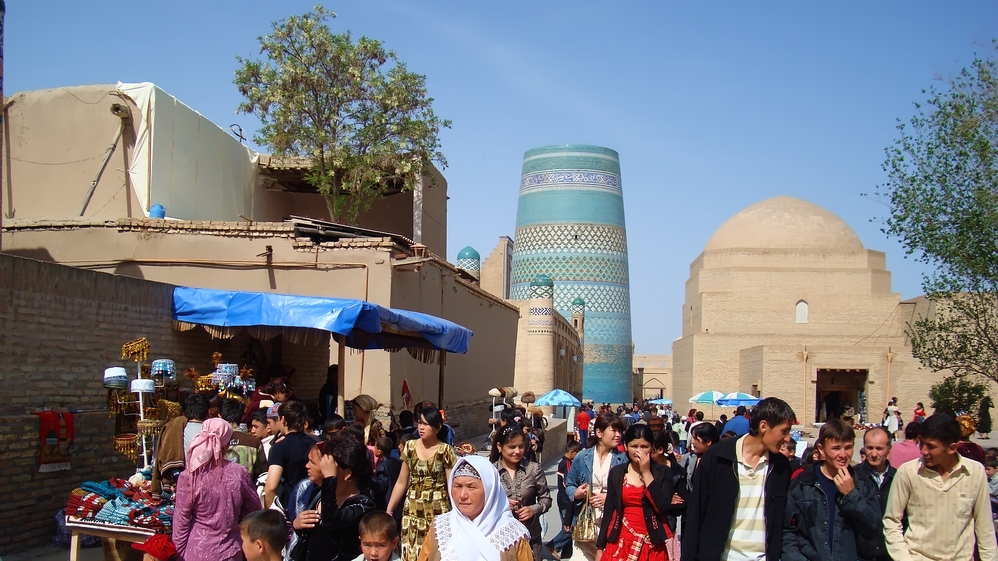 The shared price for four passengers (excluding the driver) is about 10 US$. So, I figured out that for 40 US$, I could have my "own" taxi. Well, taxi drivers definitely are a species of their own. As I didn't speak nor Uzbek or Tajik, they agreed amongst themselves how much they would charge me. And the asking price by them was 80 US$. I decided to do what usually is helping in similar situations around the world: I decided to sit it out. I went to a cafe to take breakfast and wait for things (drivers) to come. Usually there are always drivers who want customers fast. And if their colleagues can't see the negotiation or hear the price, prices always fall very quick. Not this time. The lowest fare I could negotiate was 60 US$.

As the distance to Khiva is roughly 450 km - and the time needed to get there is about six to eight hours, I agreed on the price. So far I wasn't really happy about the price, but I kept on telling myself that it wasn't a complete rip-off. However, things changed quickly once we were leaving Bukhara. At the last gas station leaving town, my driver did not only fill up the car's tank - he also filled up the taxi with three other passengers. Now this is where I got really angry. My protest to the driver was met by him with a lot of Uzbek arguing - probably stating "I don't understand English. 60 US$ is a normal price for a rich tourist". 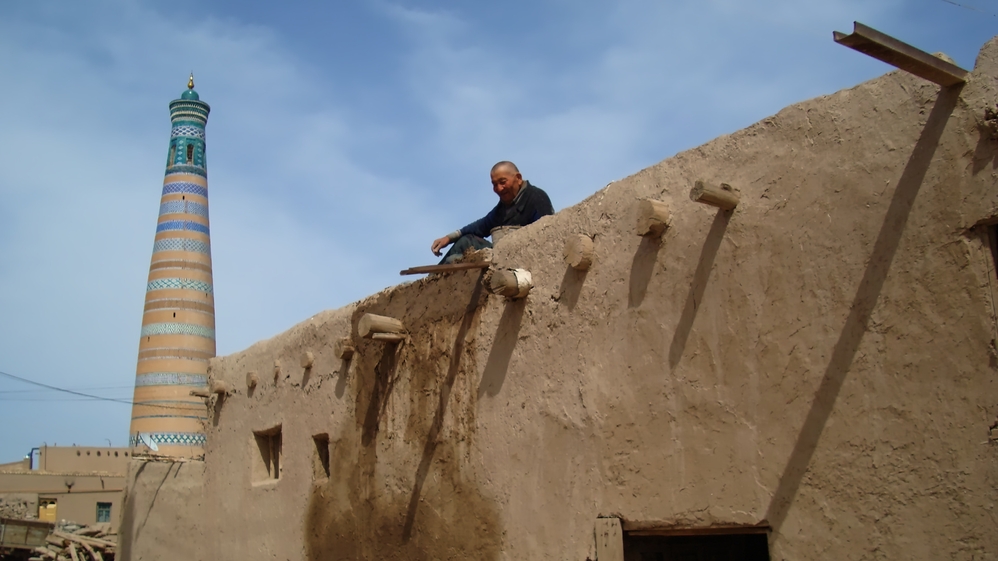 After a while, I calmed down by telling myself that this wouldn't be the last time on my trip that somebody would try to rip me off. Instead, I enjoyed the view of the steppe and tried to sleep as much as possible. About six hours later we arrived in the town of Urgench - not far from Khiva. This is as far as the driver would go - unless I would pay another 20 US$. This made me laugh and I politely refused. Upon leaving the taxi near the Urgench train station, other drivers came up to me asking if I wanted a lift to Khiva. My taxi driver spoke something in Uzbek - not surprisingly everyone asked 20 US$ for the ride. 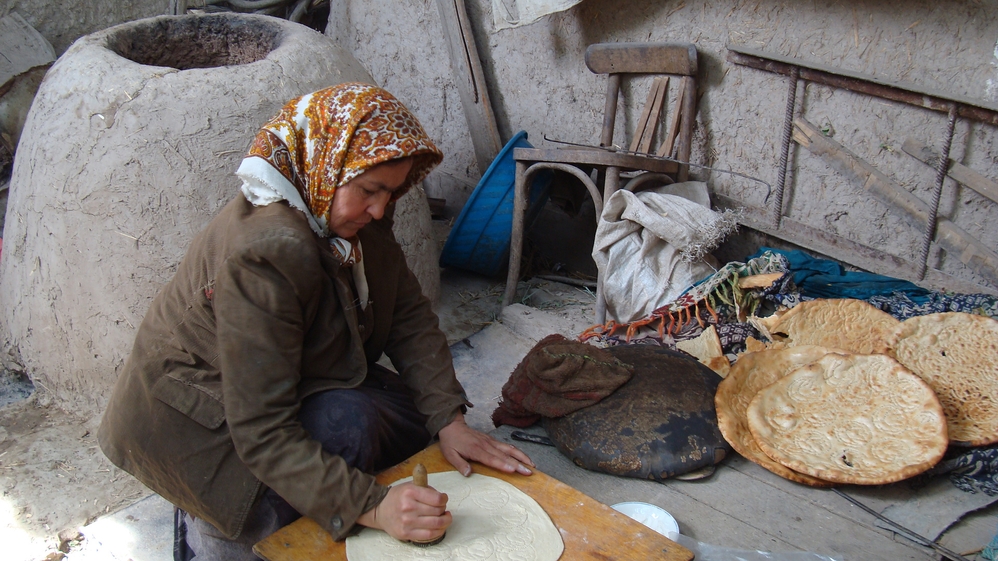 However, I had a good and cheap - albeit time consuming alternative: The (in)famous Urgench trolleybus. It is connecting the 30 km from Urgench to Khiva and costs a fraction of one dollar. The ride to Khiva on that bus was comfortable and relaxing. 90 minutes later I arrived just outside the Khiva old town. 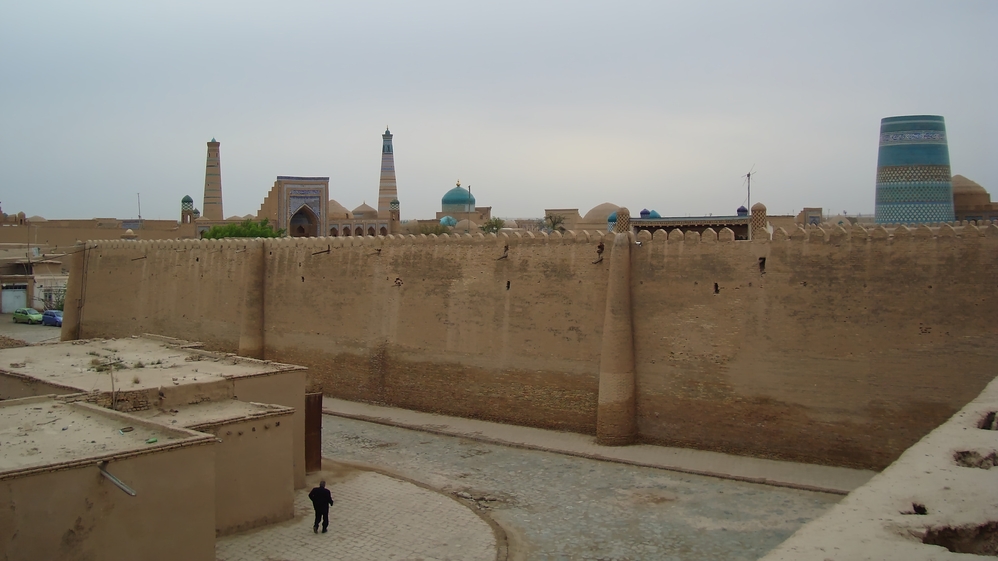 After having been in dusty old Bukhara, Khiva feels like a Disneyland for Mausoleums, Madrasas and the like. Everything here is so well preserved, clean and shiny. Museums even feature kids entertainment while parents visit the place. Don't get me wrong: Khiva is very beautiful. But it is very different from what I have seen so far in Uzbekistan. Sure, I enjoyed my stay and I met quite a few backpackers. Some of them are loosely following the same route as I, for instance Daniel - an Australian backpacker whom I met in Samarkand. 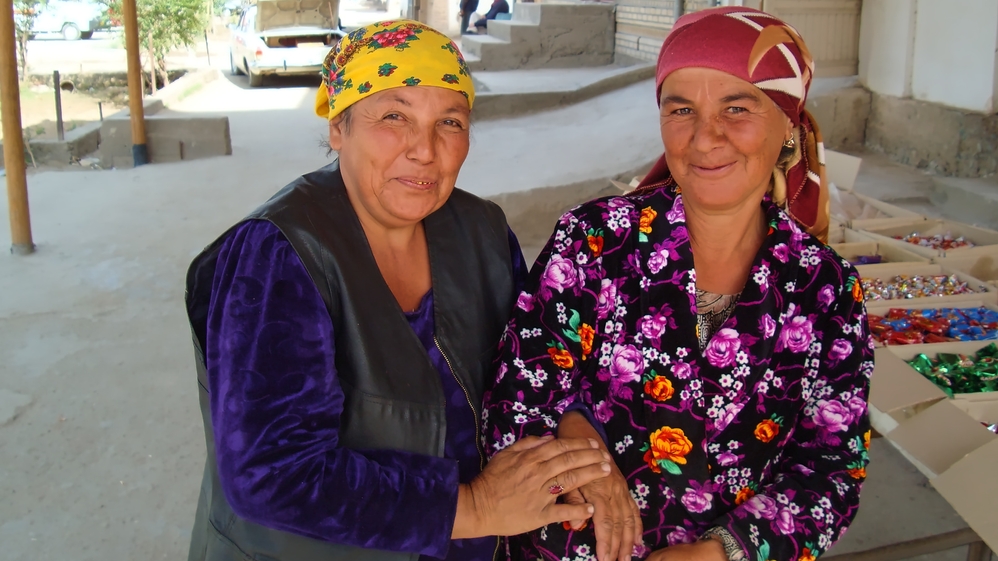 Most interestingly, I also met a Spanish photographer with whom I explored the town. Seeing a town through a professional photographer's eye was a new experience for me. He walked up to people, took their picture, went into backyards watching for about half an hour the bread baking process of the inhabitants. Essentially, he was teaching me how to walk slowly, so that I could really see things. And how to walk up and talk to people for getting their picture in return.

Khiva therefore was an entertaining visit and I enjoyed the stay much. Although the hordes of French tourists were stunning. Kids quickly learned the trade by begging for "stylos" (pens) and "bonbons" (candies). I realized that so far I hadn't seen any beggars in Uzbekistan. I guess, in a couple of years, Khiva (and maybe the whole of Uzbekistan?) will be spoiled by the influx of foreign visitors. Let's hope not.