The city of Urumqi was a surprisingly nice stay, given the fact that the only reason to come here was an administrative stop for extending my Chinese visa.

There are a lot of markets - both Chinese and Uyghur - in Urumqi. Nevertheless, a lot of these sites have become very touristic and it takes time to look beyond the purpose-built places to see some authenticity in the narrow alleys next to the main squares. I stayed in a perfect place, a new hostel downtown.

Part of the reason for staying here were some administrative tasks, such as getting a visa extension from the Public Service Bureau (PSB), a visa from the Kyrgyz embassy and a rail ticket for my onward journey. However, Urumqi grows and changes at such a rapid pace, that both the Rough Guide and the Lonely Planet guidebooks are virtually worthless for getting addresses. What is even more upsetting is the fact that tourist information and hotel staff are not helpful in solving the lack of correct information. I've got the best pointers from fellow backpackers who shared their info in the hostel. 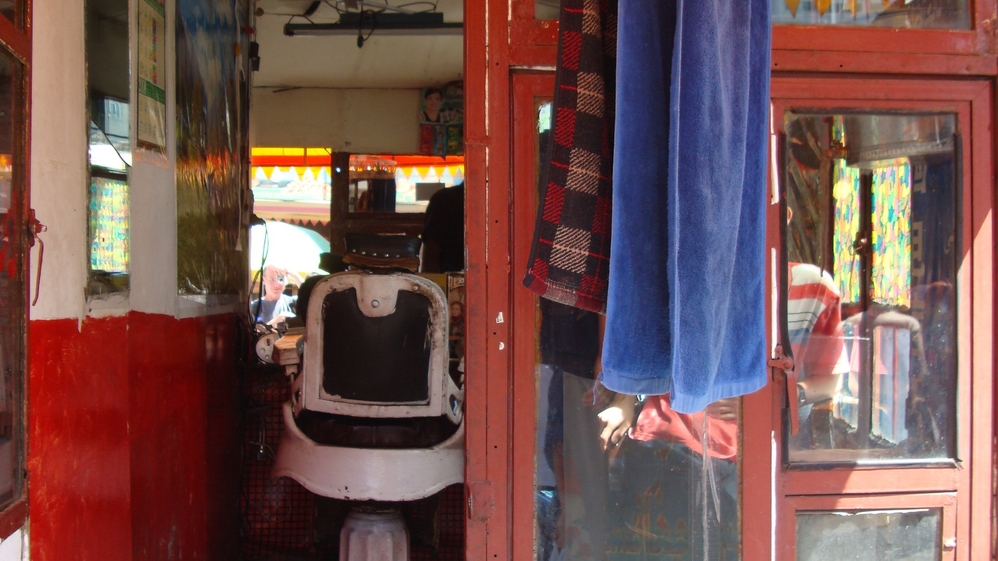 Moreover, staff outright refuse to update their information they give to tourists. For example, I got a hint from a fellow Japanese guest in my dorm to book the train ticket in the downtown railway office, instead of going to the train station located at outside the city. After writing down the address obtained from the fellow backpacker, I went to the hostel reception to ask until what time the downtown rail ticket office would be open. The lady of the house looked at me in sheer disbelief and said: "You must go to railway station for train ticket. No ticket office in town". Nevertheless, I went to the address obtained downtown where I actually found an official railway ticketing office. Within 15 Minutes I was all set and back to the hostel. When I told the same girl - by showing my rail ticket - that the service desk next to their place is actually open until 8pm, she shrugged and turned her head away.

To be fair, hostel employees were quite interested. In things that were important to them. They were eager to write down how to say "Hello" and other things in various languages of the nations arriving to their place. And they were eager and very willing to teach anyone interested in Chinese language. But I wasn't. I was interested in the PSB and some other places of touristic interest in Urumqi. Towards the end of my stay, most of the guests had similar stories about the unhelpful staff to share.

The encountered ignorance and incompetence of service staff reminded me a bit of "Fawlty Towers". I took up the habit of drinking a beer in the communal lounge next to the reception and watch naive new arrivals dealing with the staff. It was Fawlty Towers in real time and obviously I ended up calling one particular staff member "Basil". He was playing ego shooter games most of the day, monopolizing the dial-up Internet connection for which guests had to pay for. "Basil" was clearly annoyed by male guests. Most people found his new name to be quite appropriate and I wonder how long it will persist with him. Backpackers are very good and fast in relaying such important information updates. Maybe they should run the place instead. 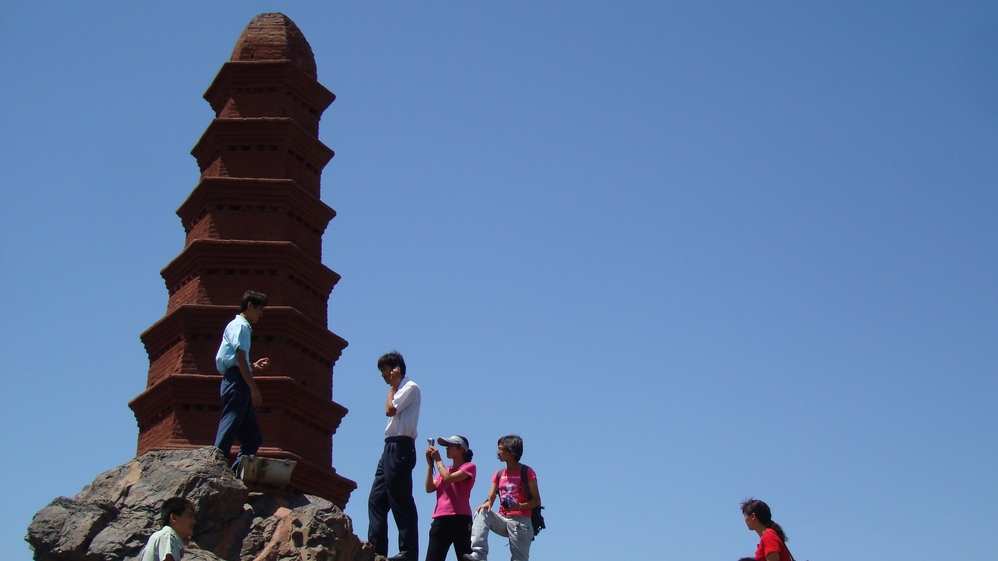 Anyhow, while waiting one week for my passport to be returned from the PSB, I decided to book tours to the surrounding areas of Urumqi. In theory, it is neither practical nor is it allowed to travel without passport in China. But what the heck - to me this was a sound decision. Actually, for the day trip to Tian Chi (Heavenly Lake), the lack of identification for potential lodging wasn't really posing a problem. An Irish girl staying at the hostel, Sue, was joining me and we set off on a Chinese tour bus early in the morning.

Although the entrance fee for the park at Tian Chi is quite steep, hordes of local Chinese were visiting the place. As they pay the same amount of money to access the place - which in their budget must be quite a setback - we wondered how important this place is to them. The souvenir stands at the park were abundant. We poked fun at all the hawkers trying to sell us useless stuff: I'm still carrying a dozen or so postcards from the Beijing Great Wall in my daypack. Trying to barter these into souvenirs - with my very honest smile - usually is being met with a determined "No" as an answer. It's my perfect solution working most of the time to get rid of the sellers. And hey, if I ever can trade the postcards into something better - why shouldn't I try?

Before that trip, we were advised by other backpackers that it would be better to stay overnight at Tian Chi, because the crowds leave at sunset. This was very true. When we left in the afternoon, we could see the noisy bazaar closing down - leaving at the same time as the last tour bus. Unfortunately, Sue and I had only planned one day there, so we went back to Urumqi on that last bus without witnessing the "Heavenly Lake" in its peace and quietness.

The day before leaving Urumqi, we decided to explore Kanas Lake, in the Altai mountains, near the border of Russia and Kazakhstan. Under normal circumstances, this trip takes three or more days. But both, Sue and I had only two days of spare time. Therefore, we decided to go as far as we could - even if we would have to abandon the trip halfway through because of time constraints.

Moreover, Sue never used her tent and this was a welcome occasion for me as well to do some outdoor camping - let alone for only one night. Again, I was a bit worried because there were constant rumors about the need of getting an access permit to the area - which we blatantly ignored. With the help of a Chinese traveler at the hostel, we managed to secure two seats on a minibus to Jiadengyu, where we arrived early in the afternoon. We were keen on going further immediately and so we started to hike towards Kanas, where we arrived around 8pm. Luckily the sun sets at around 9:30pm in the Xinjiang province - the Chinese standard time is that much off in this Western region. We put up a tent away from a small village and then we had some tea and biscuits. At night, I was amazed at how many stars one can see in this area (one fact which already amazed me - not that far away - in Mongolia). But it was surprisingly cold and so we decided to sleep inside the tent and the sleeping bags.

We discovered next morning that we were just about 3km from the southern end of the Kanas Lake (thank you Wikipedia for the GPS coordinates...). Therefore, we continued to walk towards our target. We weren't disappointed at all - the views were magnificent and worth the strenuous hike to this place. But soon enough it was time to return home - a bit disappointing, because this area definitely invites for a multi day trip around the lake shores. And supposedly, there is a strange creature living in the waters, but we could not spot any - given the short time we stayed there.

On our way back, we started to calculate at what time we'd arrive back in Urumqi. I had a train to catch and Sue a flight. And the GPS is unforgiving in calculating the ETA. Our Plan "B" was to hitch hike as far back as we could, since we saw a number of 4WD's the day before. They were driving on the dirt road next to our hiking trail. So we decided to walk back along the road. After half an hour we got successfully picked up by a local who was heading to Shihezi, a town near Urumqi. A godsend, because we already started dealing with Plan "C", which would have simply meant to reschedule both our onward journeys.

Enthusiastically, we invited our driver, a cuddly old Chinese-Mongolian, for lunch before he dropped us off a couple of hours later at the bus station in Shihezi. Surprisingly, we did not spot any check-points where we might have been in serious trouble because we were lacking proper access permits. Sue and I made it back to Urumqi in time.